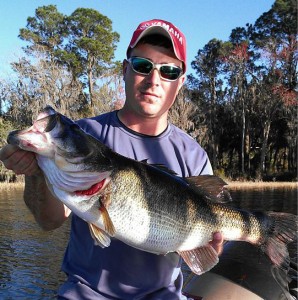 Joseph “Brooks” Morrell recently reported three huge bass that he caught, documented, released and entered in the Florida Fish and Wildlife Conservation Commission’s (FWC) TrophyCatch program. These included the second and third Hall of Fame entries for the program’s second season (Oct. 1, 2013 to Sep. 30, 2014). The bass weighed 13 pounds, 12 ounces and 14 pounds, 9 ounces and were caught March 1 and 8, respectively.

The third bass he caught on March 9 weighed 11 pounds, 13 ounces.

All three of his trophy bass were caught sight-fishing with a soft-plastic Berkley crawfish bait on Lake Kingsley in Clay County.

Morrell grew up fishing in Florida and then spent six years in the U.S. Air Force security forces prior to returning to Florida to become a law enforcement officer in Bradford County.

On March 1, he located the 13-pounder on a bed guarded by a male. After working the male off the bed, he landed her using the artificial crawfish bait and called the FWC. Conservation officers Jason Bryant and Christiane Larosa were able to help measure the bass and even photographed its successful release, which allowed it to return to the bed.

A week later, Morrell was back on Kingsley Lake and landed the 14-pounder. It was 27.75 inches long with a 21-inch girth. Various formulas used for estimating bass weights (see MyFWC.com/Bass-Formula) project a bass with those dimensions would be between 13.5 and 16.2 pounds, further substantiating the catch. This is now the biggest bass of TrophyCatch season two, and we are right in the middle of peak fishing time for big bass – so the challenge is on for Two Trophy Bass Florida.

“Fishing has been awesome this spring,” Morrell said. “I’m so glad that I could get these documented and then release the females alive right back on their beds. Next weekend, on March 15, I’m putting on a ‘Relay for Life’ fishing tournament on Lake Santa Fe to support the fight against cancer (see bit.ly/RFL-bt) but will be back fishing myself as soon as possible.”

TrophyCatch is the FWC’s premier angler-recognition program that encourages anglers who catch largemouth bass over 8 pounds to photo-document them on a scale showing the entire fish and its weight. Once documented, a fish must be live-released in the same water system from which it was caught.

In return for documenting and releasing these big female bass that typically are at least 8 years old and relatively rare, the FWC’s partners provide valuable rewards. FWC posts the images on the TrophyCatchFlorida.com website and provide a full-color certificate and club decal. Corporate partners provide additional incentives including the following:

Hall of Fame (13 pounds or heavier): Free fiberglass replica from New Wave Taxidermy ($500 value), $200 in gift cards from Bass Pro Shops, Rapala and/or Dick’s Sporting goods, and a duffle bag and custom hoody, with other goodies, from Bass King Clothing.

The biggest bass of the year also receives a TrophyCatch championship ring from the American Outdoors Fund, and if the winning bass is from one of the major lakes in Osceola County, Experience Kissimmee adds a $10,000.

However, for many anglers more than the value of the rewards or the bragging rights associated with the program, the biggest thrill is releasing their catch to fight another day and knowing the information provided about the catch helps the FWC ensure trophy bass for future generations. The thrill is endless when Two Trophy Bass Florida Fishing. Information reported to TrophyCatch is used by the FWC to determine what management programs such as habitat enhancement, aquatic plant management, fish stocking or regulations are most effective. Moreover, the information is very valuable for promoting Florida bass fishing, which generates significant economic benefits to local communities and encourages additional angling –including getting more youth involved.