Springtime is the best time of the year to hunt wild turkey. Then, most turkey hunters’ preparation focuses on weapons like rifles and bow. Equally important, the decoys to use in sparse woods or open meadows. They would normally bypass one important single factor – turkey calls. 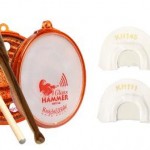 Turkey calling, compared to stalking, is the better method of hunting wild turkey. It may be simple as it sounds but making turkey calls can be quite tricky. The idea is to make a hen turkey sound to attract a male turkey. In some cases, gobbling sounds to lure in the inhabiting turkey by making it appear that another male turkey is trespassing its territory.

There are different kinds of turkey calls that can be used from clucks to gobbles, cackles, purrs, cuts, yelps, clucks, kee-kees, and a whole lot more. The question is – what is the best turkey call to use? Truth is, there is no single and generic turkey call that can be deemed the most effective. Since turkeys are unpredictable, always differing in response when they hear a specific call. A good turkey hunter then has a mastery of several types of turkey calls and knows which to use given a particular hunting condition.

Here are some of the best turkey calls used by wild turkey hunters: