Where is the Best Place in Florida to Catch Marlin?

Where is the best place in Florida to catch a Marlin?  Marlin Fishing is the purist form of big game sport fishing.  Catching a marlin is one of the top dreams of offshore fisherman everywhere and Florida has its share of Marlin to catch!  The most well known big game marlin fisherman was Ernest Hemmingway. The celebrated author and angler who often frequented the waters of the Gulf Stream, Hemmingway pioneered the use of outriggers in big game fishing.  Marlin can be caught in deep water almost anywhere along Florida’s coast but there are two places in Florida to target marlin.  One is Woods Wall, 20 miles South of Key West, lies an area known as “The Wall”.  The Wall is the outer edge of the continental shelf where the ocean bottom drops sharply from 950 feet to 2000 feet in a very short distance.

In late August the adult marlin begin to dominate “The Wall”.   The second is the Destin – Panama City area and around the bend in the Panhandle.  October is considered the best month to catch marlin in the Panhandle.  On June 14, 1985, Warren Culbertson, fishing from Destin, landed a blue marlin which tipped the scales at 980.5 pounds. To this day it still remains the largest blue caught on hook and line in the Gulf!  Blue and white marlin are the targeted species available in Florida waters.  The white marlin averages around 70 pounds, and the rod-and-reel world record white marlin, caught in the Gulf Stream off Miami Beach in 1938, weighed 161 pounds.  The Key West Blue Marlin Tournament still ranks as the largest and most successful Marlin tournament in the Keys.

The most effective method of targeting blue marlin is trolling 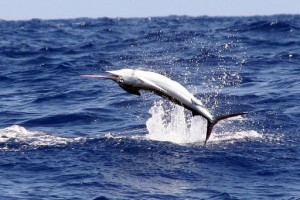 lures and rigged baits at a quick clip anywhere from 3-20 miles offshore.  If you’re lucky enough to get the bite from a blue marlin, expect a world class battle as you must fight for every inch of line you retrieve.  It is recommended to troll with 50 to 80 pound tackle and wide reels with plenty of line capacity- this will give you a fair chance if you hook into a really big Marlin or a big tuna which is definitely a possibility.  High quality large capacity lever drag reels and matching rods are a must for successful Marlin fishing.  An angler can expect even a small marlin (200 lbs) to run off 200 to 300 yards of line in a matter of seconds.  Your line is only as strong as its weakest point and when I say a 500 pound raging marlin will find any weak point in the line or the angler you can count on it.

Good knot tying is absolutely essential.  The double line is formed with a Bimini Twist. The Bimini Twist offers 100 % breaking strength and also acts as an additional shock absorber.  I would suggest using four feet of double line on 30 and 50 lb tackle and six to eight feet on 80 and 130 lb gear.  Heavy duty swivels are a must and under no circumstances should you use snap swivels.  In the world of big game marlin fishing, BIG baits catch BIG fish.  Dolphin, blackfin tuna, big bonita, and small to mid size yellowfin tuna are all on a big marlins menu.  14” to 20” lures with big profiles are customary when searching for a beast. A good recommendation is the original Sea Boots Kona Lure or the Knucklehead.  Most marlin, even big ones, can usually be released in under an hour.  The short pump and wind tactic is a good technique for breaking standoffs.  Setting the Drag- Drags should be set at 25% to 30% of the line’s test by using a hand scale, pull line off the tip of the rod and adjust the drag accordingly.  Remember one important thing- catching large fish like a marlin is not a one man job, it takes a minimum of two – the captain who operates the boat and the angler who operates the rod and reel. If a mate is on board then you have the perfect team and a better chance of hooking and landing a good fish.