There is open season on hog hunting in Florida during all daylight hours, seven days a week, 365 days a year!  Hogs are not native to Florida and do tremendous damage to pasture lands and crops.  The control of wild hogs is a serious business, they have invaded nearly every corner of the state.  European pigs arrived in the country with some of the earliest settlers, and they either escaped or were released into the wild nearly 500 years ago. pigs were probably brought to this country by Hernando DeSoto, the Spanish explorer, who landed in Florida at Charlotte Harbor in 1539.

There are about 4-5 million wild hogs in the US. Wild hogs are the most destructive invasive species in the United States.  An estimated 500,000 wild pigs now roam through the dense vegetation of Florida.  Female hogs can bread at 8 months and A pig can produce two, and sometimes more, litters a year, especially in southern Florida where conditions are perfect, a litter can number a dozen, that’s a lot of pigs.

Hogs can weigh more than 300 pounds, are extremely intelligent and aggressive, and can be very aggressive when it comes to foraging for food. They have been known to attack domestic calves and lambs. Hogs can also carry diseases that can be transmitted to livestock, making them enemy #1 to farmers and cattlemen alike. 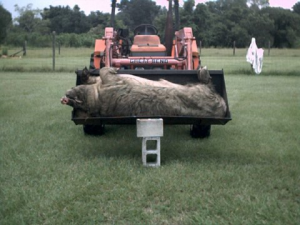 Florida Hog Hunting is a booming industry and can be hunted year-round.  The only exception is on public lands according to FWC: “On wildlife management areas, hogs may be taken during most hunting seasons, except spring turkey. But, if it’s during archery season, you must use a bow – during muzzleloading gun season, you can only use a muzzleloader.

You do need a hunting license as well as management area permit and any other necessary permits to hunt wild pigs on WMAs – where on some, daily bag limits on wild pigs do apply, and on a few, there’s even a minimum size limit on what you can take.”  Hogs can be hunted in Florida using a rifle, handgun, spear, crossbow, dogs, knife, bow and arrow, and muzzleloader.

Hogs can be hunted on foot, horseback, ATV, or from a swamp buggy or still hunted from ground or tree blind.  Unusually large, trophy-sized feral pigs have been taken that reach three feet tall, six feet long, and over 500 pounds.  Trophy Boars have four continually growing tusks that can be extremely sharp. The upper tusks are often 3 to 5 inches long but have sometimes been recorded at 9 inches in length.  These tusks can be deadly to animals like catch dogs and humans.

Hogs can run up to 30 miles per hour and are good swimmers.  Hogs feed most heavily at dawn and dusk, spending the majority of the day either wallowing in mud holes or resting in dense vegetation. Wild boar in Florida is considered a dangerous game and a charging boar is considered exceptionally dangerous quarry, due to its thick hide and dense bones, making anything less than a “kill shot” a potentially deadly mistake.  Wild boar hunting is neither for the faint of heart nor for solo hunters, the boar can prove to be a vicious opponent that never surrenders without a fight. 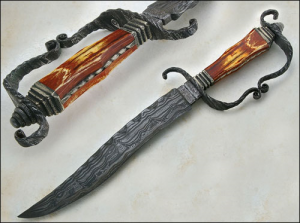 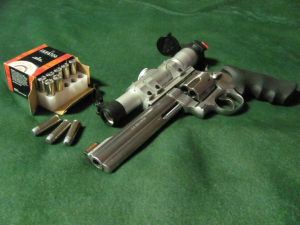 So the army’s coming over for dinner and you need to come up with something to feed them. How about cooking up a whole hog. It’ll serve nearly 40-50 people so it’s a great choice for that church social or the family reunion.

The first thing you’ll need is a place to do the cooking. You can run out and spend $1000 or so on a good high-quality smoker or you can put one together in the backyard. Depending on how industrious you are you could buy some plans or you could rig one up.

One way of building a pig cooker is to get some 8 inch stone blocks a few metal rods and a wire screen. Build a rectangle with the blocks so it’s inside measurements are about 42″ wide 50″ long and 18″ deep. Set the metal rods on top of the blocks to support the hog and place the wire screen over the rods. Then you can place the hog right on top and let it cook.

Once you know how and where you are going to cook the hog you need to get the pig. Try to find a skinned and trimmed carcass around 60 to 100 pounds. You want it to be lean so that you don’t start any grease fires. The carcass should be butterflied so it can lay it out relatively flat. To get a whole hog, call around to some local butchers and see if they can help you out.

If you can refrigerator a whole hog get it a day in advance and season it up with a good rub then let it sit for a good day. If you don’t have a place to store it then get everything ready so you can get the hog on the fire as soon as you get it home. Season it as you cook.

Now you’re ready to build a fire. If you are using charcoal briquettes you need about 60 pounds you can also use hardwood logs burned down to coals. For use of professional smokers, follow the instructions on building a fire. If you are using a backyard pit, I suggest building a fire ring next to the pit so you can build up the fire there and then move the coals to the pit.

You’ll want to keep adding coals to the pit throughout the day. Start with about 20 pounds of coals. Load them all along the bottom of the pit with more coals on the ends under the hams and the shoulders so the hog will cook evenly.

Cooking: The plan is to cook the hog for about 10 hours. Start in the morning. Build up the heat throughout the day and watch the temperature carefully. Use a good meat thermometer placed deep into one of the hams. When you hit about 170 degrees F. (no less) the hog is done. Cook skin side up for 4-8 hours and then flip. Cook an additional 1-2 hours and turn again. Finish cooking skin side up. Make up a good mop and baste the hog about every hour or so. Apply whatever sauce you want at the end.

Once the pig is cooked remove it from the fire and let it sit for about an hour, wrapped up tightly. This will let it cool down a bit, but also let the heat even out and the juices flow back into the meat. Now you are ready to start pulling the meat. The meat should pull free from the bones. You should start by cutting or breaking the pig up into large pieces about 5 to 10 pounds each.

From these large sections shred the meat into small pieces or strips. You do not want to crush the meat but gently pull it apart. A good pair of insulative, latex cooking gloves are a must. You will want to put the shredded meat into a large pot to keep warm and to mix up. A perfect pile of pulled pork should have meat from every part of the pig.

Place roast fat side up in a roasting pan and baste generously with the sauce. Roast for about 3 hours, basting occasionally with sauce and pan drippings. Let roast sit for 10 minutes in a warm place before carving. Slice and spoon additional sauce over each portion.

Plan your next adventure today will Hog hunting in Florida. You can explore so many destinations and add some additional activities including fishing in as well.