Rutting out the Beasts

Rutting out the Beasts

Boar hunting is sometimes considered a test of bravery and strength – after all, the hunter goes after a wild animal that could easily defend itself with sharp tusks. Wild boar and feral pigs are hunted for their meat, their tusk as a marker for trophy animals – set at more than 2 inches, their head to be mounted as display, and just for fun and challenge.

When is the best time of year to boar hunt? Well, there is a hunting season set in most states although some areas allow boar hunting at any time of the year. So, it is best to check with a specific state or locality as to the schedule of the hunting season. 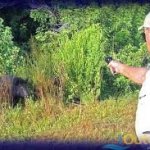 You can hunt for hogs anytime of the year, yes, but you might want to stay away from the set hunting season. This way, you’ll have less competition because most people choose to hunt during season hunting. Opinions among hunters are divided as to which season is best for a hunt – summer or winter. Each season does have its advantages.

During summer, when temperatures become really high, it is easy to find boars near sources of water. All you have to do is wait near a body of water and you’ll likely find one. Still, some hunters prefer the added challenge of hunting boar during winter. Their tracks can be hidden by fresh snow – the best thing to do is use trained dogs to hunt the boars and keep them at bay while you prepare for the kill.

To answer this question, it is best to go out and try hunting in both seasons to see which you prefer.