Warm your heart with crappie fishing in Florida

Warm your heart with crappie fishing

There’s a very good reason to head to Florida this winter and it’s not just to escape the cold, snow and ice. 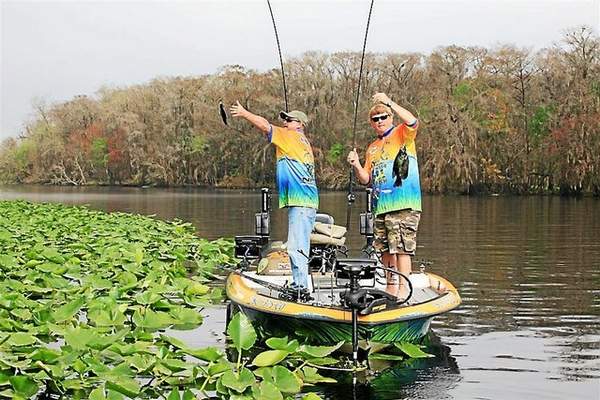 Florida as just about every sportsman knows has excellent fishing at this time of year. From its inland lakes to its salted seas, anglers can pursue so many species it would take a few paragraphs to name them all. But one fish that may not make it on the list, or get a high ranking, is the estimable crappie — pronounced “crop-ee” in southern states and often called a “spec” in the Sunshine State.

In Florida’s hundreds of natural and enhanced lakes and through the state’s long river systems, the crop-ee is as plentiful as other species and grows to sizes not often seen in these parts.

Desperately wanting a respite from our Pennsylvania climate I headed to the St. John’s River north of Orlando to fish for crappie with some of the country’s best crop-ee fishermen. Following the Crappie Masters Florida State Championship at Sanford, I got to fish with the teammates Whitey Outlaw and Mike Parrott, Matt Morgan and Kent “Doc” Watson, and Dan Dannenmueler among others. And with these accomplished anglers, I learned some new tricks and techniques that even if you don’t head south this winter, are certainly worth applying to our local waters when the freeze finally lifts.

Of everything, I learned it was the jigging technique of Outlaw that was the biggest eye-opener. Outlaw — and yes that is really his name ­— hails from the Santee Cooper area of South Carolina. I’ve known Outlaw for nearly 15 years and he’s always had something new, interesting and fun to show me when we fished. This year it was long-pole jigging or, as he called it, “Power Jigging.”

Unlike so many Dixie-inspired tactics for crappie, this technique involves just one rod per person. A long pole of 10 to 14-feet and a reel that looks more like a small fly reel with a stubby handle are the main components though small spinning reels can be used. Suitable rods include the 14-foot B’n’M Bucks’s Graphite Jig Pole, BFJP143n, a B’n’M 12-foot rear-seat rod, SHSS-BS-122 and the B’n’M 12-foot BCCR122. The better rod and reel outfits come in at around 4 ounces. Even after hours of fishing, they’re like holding a dry feather while Warm your heart with crappie fishing.

The long-pole game couldn’t be simpler in execution but it’s the details and fine tuning of the equipment that lifts an ordinary day of crappie fishing into a great one.

Before going further I should say that long-poling is usually performed around lily pads or other surface weeds. But I can see where it can be applied around docks, bridge pillars and many other places where crappie congregate in shallow water.

It was Morgan who called the technique, “Dipping and Sticking,” and that tells you a lot of what you need to know.

Using a light-weight jig and a very short line, the angler drops, or dips, the lure into openings in the pads, wiggles or jostles it a bit then, if crappie doesn’t strike, lifts it straight up and out of the water to dip it into the next opening.

At no point is the jig cast to the water nor is it reeled back. Indeed, when a crappie hits – the “sticking” it to them – the fish is quickly yanked straight up and out of the weeds while warm your heart with crappie fishing.

To make this clear let me provide more details about warming your heart with crappie fishing.

Going along in the boat, the angler uses an unusually long but lightweight rod at the back of which – just like a fly rod – is a reel that resembles a fly reel with a stub of a handle. The reel has a very low gear ratio and is only used to hold the line.

Hanging from the rod tip is no more than two feet of line, often a bit less. With a jig and soft plastic on the line, the angler patrols along looking for openings in the pads or perhaps good spots against a riprap wall or beside some other cover or structure. Sighting a spot, the jig is dropped vertically into the opening. There is no cast at all.

The finesse portion of the presentation comes with lowering the jig gently and slowly into the spot. You don’t want the bait to sink like a stone but instead float down – if such a phrase can be used. To do this the angler might maintain a semi-tight line as the jig descends. However, the speed of descent can be varied by increasing or decreasing the amount of slack.

As the jig falls or at its lowest point, the rod tip is lightly to shake or bounced so that the jig wiggles in the water.

If no strike occurs, the rod is lifted straight up and the jig is reinserted into another opening.

If crappie does strike – and this happened a bunch on the St. John’s River – the fish is pulled up as quickly as possible. Certainly, you don’t want the crappie to go running through the weeds and around the boat.

To that end, the line on the reel is a braided line. Outlaw favored a braid with a ten-pound diameter capable of lifting at least three times that weight. The braided line cuts through weeds like a weed whacker

As you’d soon learn, this technique is a lot simpler than any words can make it sound and frankly I was performing “power-jigging” within five minutes of trying. The whole thing harkened back to my farm-boy days of using a cane pole, a cork, and a worm.

The jig that Outlaw, Parrott, Morgan, and Watson used was the Rockport Rattler. The hook was adorned with a Mid-South tube.

In any case, this crop-ee fishing in Florida was anything but crappie.

By Vic Attardo, The Mercury

| 0 Comments
Warm your heart with crappie fishing in Florida</