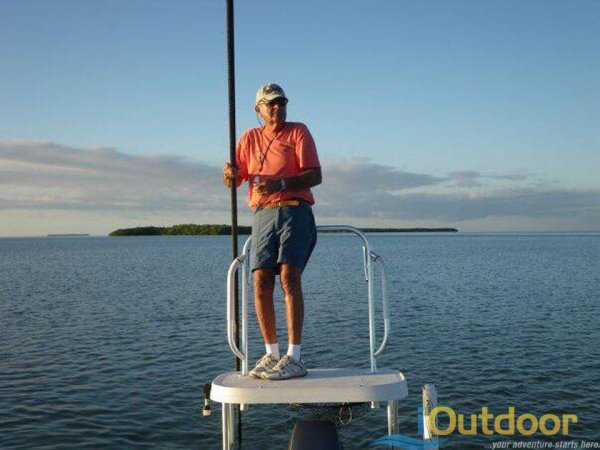 Hank Brown, revered as one of the best light-tackle fishing guides to ever prowl the flats of Islamorada and the Florida Bay backcountry, died late Monday. He was 86.

“Hank was a great tarpon fisherman, one of the best ever in my opinion,” said Charlie Causey, an Islamorada angler who won the prestigious Don Hawley Invitational Tarpon Tournament in 1986 with Brown at the helm.

“Work ethic got him where he was, but being a great guide is more than just experience,” Causey said. “To be really good, you need a feel for the fish. And Hank could feel the fish in his bones.”

The Hawley was the first major tarpon tournament to require releases, a position strongly supported by Capt. Brown.

“He was a great all-around guy who made time for everybody, especially children,” Forster said. “On his charters, he’d help people get fish and also teach them about preserving the Keys resources.”

A Maryland native, Capt. Brown left the business world to devote full-time to his fishing career that lasted for four decades. In 1982, he started selling his Hook Up lures, jigs specially designed for light tackle on flats and “skinny water.” The business continues under owners who sell the popular line of Capt. Hank Brown’s Hook Up Lures.

Capt. Brown’s willingness to explore new waters of Florida Bay and chase fish anywhere earned him the good-natured moniker of Run Aground Brown.

He was a longtime member and officer of the associations that worked on behalf of fishing guides and protection of the local waters.

“It takes a long time to be considered a top guide, and Hank Brown was,” Causey said. “Hank had a great sense of humor and it was great to be in a boat with him. But when it came time to fish, he was all business and expected you to do the things that needed to be done.”

Hank Brown is survived by wife Joy, son Michael and daughter Michele. Details of a memorial service will be announced.