Catfish are a species of freshwater fish that is native to Louisiana. Prized by consumers and anglers alike, it’s one of the state’s primary protein sources throughout seafood dishes. With three main species, catfish can be caught in a Myriad of freshwater locations.

While Louisiana is home to a wide variety of freshwater species, catfish remains a long-time favorite among anglers and culinary experts.

Catfish make up a large portion of the angling done in Sportsman’s paradise and can be caught in almost every body of water.

Although there are a few other species, Louisiana is home to three major species of catfish. Weighing anywhere from a few ounces to over 100 pounds, each species could be easily discernible to anglers who know what to look for. Thanks to their distinctive feeding patterns, habitats, and distinguishing features.

A fork-tailed catfish that earned its name from the slate blue coloration of its back. The blue catfish it’s both a scavenger and a predator. Preferring the cool waters of deep tributaries and channels and rivers. Blue cats can be found enjoying Clearwater over Sandy, Rocky, or gravel bottoms.

Relying primarily on their sense of smell, blue cats prefer bait with a strong odor, preferring life or recently deceased natural bait, although artificial bait has been noted to work. 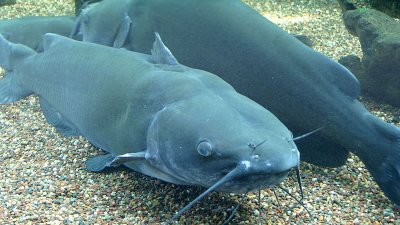 coming in a variety of colors, the channel catfish has a jutting upper jaw and an aggressively forked tail. Coming in every shade between slate to olive, channel catfish have even been spotted to have gray or blue hues. Are often speckled with black or dark gray spots along their back.

Preferring the calmer waters of Louisiana, these white-bellied catfish prefer slower-moving bodies of water such as reservoirs, large rivers, and lakes.

A close second to bass as the most angled fish in the sportsman‘s paradise. Channel catfish are found in nearly every waterway in Louisiana and are delicious on a dinner plate.

Punch baits often work well for channel catfish, although crawfish and nightcrawlers have been known to be effective for these bottom feeders. 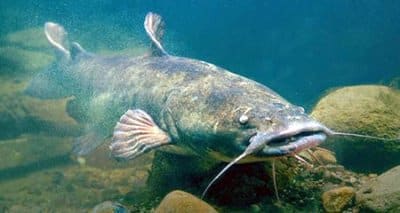 Also referred to as the yellow catfish, shovel head, and Appaloosa catfish, the flat head catfish can often be confused with the other two species. However, with its unique coloration and smooshed head, this yellow and dark olive catfish can be told apart by a few of its unique features.

Reaching lengths of over 4 feet and record weights of over 100 pounds, the flat head catfish orange its name from nasty underbite and upside down the shovel-shaped head.

One of its most distinguishing features, which allows it to be told apart from the other two species, is that its tail is notched, not forked.

Solitary predators, these lone catfish, prefer to lurk beneath the underwater structure in creeks, streams, and river banks.

Often found under submerged logs, trees, and undercut riverbanks, these aggressive catfish are ambush predators that rely solely on live prey as their food.

If you can find slow-moving, murky water with structure, a flathead catfish is likely somewhere close.

While most would assume that the best time of year to angle for catfish is the summer, the best catfish bite occurs during the spring and fall.

During this time, the catfish replenish from their winter lethargy or story up for the colder months.

Late Spring and early summer is also the spawning season, and many species migrate to nesting grounds upstream, with males remaining there until the eggs hatch to prevent other fish from consuming their young.

The bites are ferocious, and the action is nearly nonstop.

During the warmer months, anglers can target dawn, dusk, and nighttime. When the fish will be seeking responses from the sun and looking to hunt in the shallow water.

During the cooler months, the warmer portions of the day will yield the most success. As catfish will seek out the warmer, shallower to hunt. 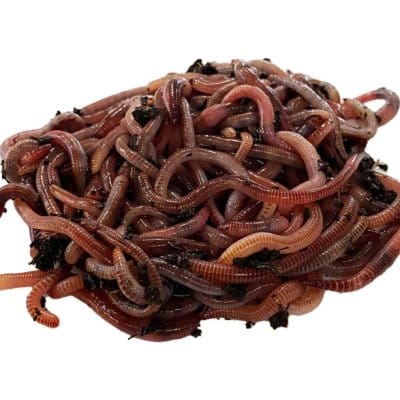 Punch baits, soap baits, and the variety of Gulp products on the market have proven to be quite effective when angling for catfish.

A 2700-acre Reservoir built in 2001 near Epps, Louisiana corners the market on the state’s channel catfish population. Lacking any flathead or blue cats, poverty point produces channel catfish consistently between 4 to 6 pounds. With 15 pounders having been reported by individuals and researchers.

With few natural predators, the area is rich in shad and crappy, both on the channel catfish’s menu. Despite being a popular fishing location, its channel cat population is relatively untouched.

A Premier catfish habitat, Lake D’Arbonne is located just outside of Farmerville and holds a variety of catfish, including flat heads weighing over 50 pounds.

The blue catfish are scarce in lake D’arbonne, the flat head and channel catfish action is consistent throughout the year. With a strong Shad population, anglers would do well to place these small fish beneath a cork or type line them next to the structure.

Some of the best catfishing in north Louisiana is found on the red river. Home to a sizable population of blue catfish due to the rocky bottoms and deep water.

An excellent fishing location for all species, blue flathead catfish scavenge throughout the basins of each red river lock. Numbers 4 and 5 hold some of the largest catfish caught in the state.

With flat heads and blue cats weighing over 40 pounds recorded in these waters. Dwight Hendrickson’s 2493-pound blue catfish in lock five set a precedent for some of the best big catfish fishing in the entire state.

A cesspool of leviathan-like catfish, the black lake boasts a regular catch of flatheads. Many are over 60 pounds in its 13,800-acre Lake which connects to the red river through bayous. Rich with prey such as Shad and crappie, the black lake is also full of submerged structures like downed trees and stumps, providing perfect cover for ambush predators such as flathead catfish.

Containing a variety of species, including blue, channel, and flathead catfish. Blacklidge is often claimed to hold some of the best catfish fishing holes in Northern Louisiana, if not the entire state.

Known for producing large bass and a staggering number of crappy, Toledo bend also provides a strong catfish populace. Rich with roots, logs, rocks, and undercut banks, Toledo bend provides some of the best catfish habitats in the southeast. Yet is still readily accessible for both shore and boat anglers.

Its 185,000-acre footprint is home to blue, channel, and flathead catfish, with cats in excess of 72 pounds recorded caught there.

Many anglers find success suspending cut bait. Crawfish, shad, or nightcrawlers from a cork in the middle to lower portions of the water column. 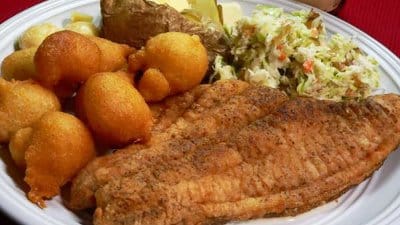 One of the best states to angle for catfish in the US. Louisiana lives up to its name of sportsman‘s paradise with quality catfish at scenic locations. With plenty of locations to angle from, check the local and state regulations before hitting the waters of the sportsman’s paradise in search of monster catfish.