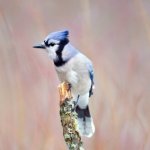 Florida is home to more than 500 species of birds, many of them beautiful and interesting. Some of them can be found almost any time of the year while others come and go, depending on the season.

An example is the Magnificent Frigatebird, a species sometimes referred to as Man O’War. Males are mostly black but have a scarlet throat pouch that is inflated during mating season while females have a white breast, blue eye ring, and brown bands on their wings.

Another interesting species is the Canary-winged Parakeet, also known as the White-winged Parakeet, is a little parrot that is extremely hard to spot while bird watching. It is mostly green but has white patches on its wings.

The White-tailed Tropicbird is a seabird that is slender and mostly white in color. Its wings are very long and the inner wings have a black band.

Another interesting bird species in Florida is the Red-whiskered Bulbul which has a brown back and a white front. It is a crested bird and is especially notable for its red face patch.

The Purple Gallinule is actually a multi-colored bird species that has large yellow feet, mostly green back, red and yellow bill, and a purple-blue plumage.

The Roseate Spoonbill has a long neck, long legs, and a long bill that resembles a spatula. It is mostly pink in color but has a white neck and greenish head.

The Masked Booby is mostly white in color but has pointed black wings and tail. It also has a distinct dark grey face mask.