PALM BEACH COUNTY, Fla. – Peter Buban is a big guy who has a big fish story to tell. 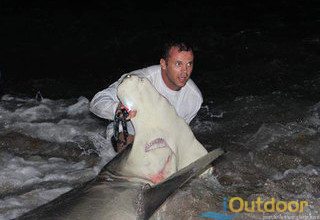 While fishing in Palm Beach County, Fla., recently, he felt a tug on the line.

“We just saw the reel start screaming, and I jump, I put up my harness and I start to fight the fish and I realize it’s going to be a huge fish!”

With the help of his friends, he fought the monster for almost an hour.

It was Buban’s biggest catch ever: a 13-foot, 9-inch hammerhead shark weighing 1,000 pounds.

It won him his first competition and was a record for the Black Tip Challenge Annual Fishing Tournament.

“I basically beat everybody by 2 and a half