SAILFISH CHALLENGE!
My buddy went with us to Sailfish Marina for an offshore sailfish tournament I was hosting but somehow got weigh laid and missed both days of the tournament. When we got back to the dock on the final day everyone had had a good time but my buddy John who had actually paid for his share of the trip did not get to go out. So I promised him that I would take him the next day, Sunday, and catch him a sailfish! Well John said he had to get back to town and did not have time to fish the next day but he said he had three hours in the morning and if we could make it happen then he would give it and try and go. Now we all know that promising to deliver a fish on demand is very hard to do especially in the ocean and especially when you make that target fish a sailfish! But the promise to deliver had been made and the trip was on. 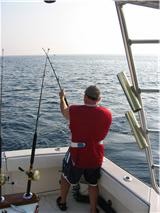 So I stayed up all that night hand rigging selected fresh ballyhoo, making them up with ¼ ounce chin weights and tied to 80# fluorocarbon monofilament leader. I poked the eyes out and broke the backs and squeezed the intestines out to try and make them swim as natural as possible. I used no skirts and a single circle hook to increase our chances. Morning came and it was bright and clear and the offshore water calm. The water depth at a ¼ mile offshore is about 90 to 100 feet, perfect for bait schools hugging the shore. We had the baits in the water for about three quarters of an hour when low and behold we had a strike. It was a nice sail! I couldn’t believe my eyes and I was so happy for John and excited that I had done a good job for him. John came to the back of the boat and took up the rod and proceeded to tie into the fish, with a little direction I showed him how to pump the fish up and reel down on him and in no time we had the fish alongside. After taking some really nice pictures we released the sail for another day.

I felt like a true fisherman that day, able to deliver on demand, even though I know that it is really up to the fish and sea gods to make it happen. I was proud to offer a chance to my buddy to catch the first and only sailfish of his life and to do it in record time and get back to the dock without incident. The seas were calm, the boat ran well and the skies were beautiful- a good time was had by all.