One of the most memorable challenges anglers all over are bound to take is to tackle the Silver King or the tarpon in the waters of Florida. The Megalops atlanticus is commonly known by the name Tarpon. Anglers flock from different parts of the world to fish in Florida because it is here that many great numbers of Tarpon migrate to. 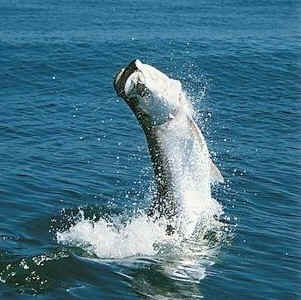 There is little known about the Tarpon because it has no food value compared to other fish. What is known about the Tarpon, however, is that these are prehistoric animals dating back as far as 100 million years. Also, possess a unique organ called the swim bladder which enables them to breathe from the atmosphere. Tarpons, in their early stages of life, typically stay in shallower waters. However, once they grow to about two feet, they move to larger bodies of water. Tarpons are usually found in deep, man-made canals and holes far up the coastal rivers of Florida and in the upper reaches of large bays.

Never go out tarpon fishing unprepared and without any foreknowledge whatsoever. What is being caught are not little fishes but giant ones that can actually exhaust any novice fisherman. The key to successful tarpon fishing is to find northbound schools on the beach. This situation usually presents itself after the first full moon in June. Compared to southbound tarpons, northbound tarpons are hungry and are more likely to stop for bait.

After the right type of tarpon is found, proper presentation and good bait are all that is needed to make the catch. Anglers should distance themselves from their targeted tarpon from a 50-foot gap. With tarpon fishing, overcasting is always a good idea. Next is to land the bait in just the right depth. The bait should be thrown so that it would sink around 8-10 feet just barely above the tarpon’s head and line of sight. Remember, they are easy to spook fish. Once a tarpon is spooked, anglers risk losing not just one tarpon but the whole school of them. Lastly, when a tarpon hooks on to the bait, anglers should most definitely hold on.

For novice fishermen or anglers new to tarpon fishing, Florida offers many tarpon fishing charters. With their help, visitors will be guided on the right equipment, the right fishing technique, and as well as the right bait to use for successful tarpon fishing in Florida.