Boning in the Keys

Boning in the Keys

The fish responsible for making the Florida Keys and Key West backcountry and flat fishing famous is none other than the bonefish. Bonefishing is a catch and releases sport that is quite popular in Florida. Catching bonefish is quite a challenge even to the most hardened anglers. This is because the bonefish is built for speed. It requires lightning-quick runs with the drag system of the greatest tackle to be able to catch this fish. 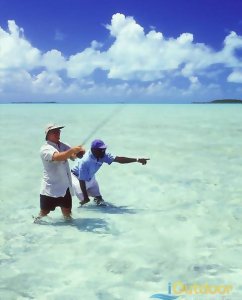 The bonefish is known by the name “The Gray Ghost” for its silver color with a blue or greenish color in the back. It has a slender and round body with a long drawn snout and an overhanging and downward pointing mouth. The bonefish can be found in the inshore water of the Atlantic Ocean, Gulf of Mexico, and the Pacific Ocean. This type of fish likes to dwell in shallow waters but go back to deeper waters with the tide. Other areas where this fish can be located are in grass flats or white sand flat, usually in waters that are less than three feet deep. Bonefish is often seen in multiple numbers especially in shallow flats while scavenging for food.

There are different ways to fish for bonefish in the flats of Florida. One type is to use light tackle with live bait. Bonefish feed on shrimp and crabs. Baiting them with live shrimp can prove to be successful. Light tackling bonefish can also be done with artificial bait.

Fly fishing can also be used to catch bonefish and is a big technique when boning in the Keys. When fly fishing, it is best to use a number 7 to 9 weight fly rod that comes with a complimentary weight reel. It should also have lots of backing and have a fluorocarbon leader system. Fly patterns that can reel in bonefish include Crazy Charlie, Borski shrimp, and Merchant Crab.

Hooking a bonefish may be easy enough; the real challenge, however, is in reeling them in. So once a bonefish is hooked, anglers should hold on tight and let the drag burn as they are positioned for a fight. Being able to catch a bonefish is one victory that can repeat itself over and over again with still that same glorious feeling of achievement.