Why is a Wahoo Fish Called a Wahoo?

Why is a Wahoo Fish Called a Wahoo? 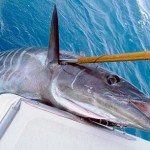 A Wahoo fish is a tropical species of game fish that is a member of the mackerel family like the Tuna. For anglers, it is known not only for its speed and fighting power. But also for its high-quality, white, tasty meat. In fact, it is among the most highly regarded gourmet fish meat, of course, also demanding a hefty price tag. No wonder Hawaiians call this fish Ono, which means delicious. It is also called by other names in other countries like “Peto” in Central America and the Caribbean. And in Japan, it’s called “Kamasu-sawara.”

Wahoo has mild-sweet tasting flesh with a firm texture, moderate fat, and large, circular flakes when cooked. Their flesh is a beautiful white color and remains white when cooked. Fillets have less blood-line than similar pelagic fish. This means they have a higher yield from fillets to useable portions. Shelf life for Wahoo is relatively short…up to 10 days if properly cared for.

The Atlantic wahoo fish is steel-blue below and pale blue above its dorsal fins. They have small scales covered there body, smaller than the average fish their size. Depending on the size of the fish, it can have up to 25 to 30 irregular blackish vertical bars on their sides. These will fade rapidly after being caught or by death. They have very large mouths with strong, triangular, compressed jaws, and finely serrated teeth. Their snouts are about as long as the rest of their heads.

“Wahoo” is quite a peculiar name to call a fish. There are no actual records to explain why a Wahoo is called as such. It is said, however, that the fish’s name originated from the first European explorers who came to the islands of Hawaii. During their first exploration of the islands, they discovered a delectable local fish. This fish thrived in abundance off the island of Oahu year-round. The maps they produced during those times referred to Oahu as Wahoo. Thus, the fish carries the same name until today in Hawaii.

Another name of Wahoo Fish 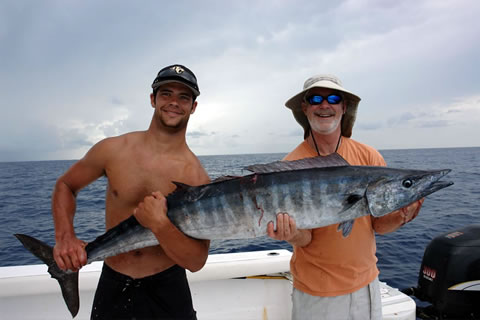 Why Wahoo so Popular

Regardless of the peculiarity of its name, the Wahoo is among the most-prized game fishes. This fish is incredibly beautiful with iridescent, grayest-blue vertical stripes running along its body. It can also reach an amazing size, reaching up to 180 pounds and 8 feet in length. Most importantly, it is known for its unbelievable speed. It is considered one of the ocean’s fastest swimmers, with recorded speeds up to 60 miles an hour!

This species of fish generally prefer a solitary environment, but it is also common to find them in small schools. In pristine conditions, some of their schools have been known to reach up to 100 fish. But it is a rare occurrence these days to find that many. Wahoo is thought to be relatively fast-growing compared to other species in the ocean. In one study, a wahoo that was tagged, released, and recovered ten months later had grown around 22 pounds in less than a year-from 11 lb.

Where can you catch Wahoo

There are many places you can catch Wahoo fish these days. Were going to talk a minute about a few broad locations and more detail on specific locations. So let’s get started. We know that Hawaii has an abundance of Wahoo and on record as one of the first places they were seen. But over time anglers have found places all over the world and more importantly the United States.

Texas in the past few years has become a hot spot, especially around Port Aransas, Texas. We believe the additions of offshore oil rigs have helped isolate these species off the Texas coast. Additional to the oil rigs, the area weed lines, and debris fields have not hurt the fishing. Really throughout the northern Gulf of Mexico has become a great place during the season when the run is on.

Moving east to Florida, there are many locations that have become a hotbed for Wahoo. Starting at the southern tip, being caught in the Florida Keys, moving north to Miami, Stuart, St Augustine all the way north to Jacksonville. The Wahoo uses the Gulf stream to migrate just as many of the other species. But they do seem to stay around a little longer than other species. Between the months of July and November, you can expect to have pretty good odds of catching one or more.

The Bahamian islands with its crystal clear water are one of the best places to catch a Wahoo. Simply because you can spot the fish well in the water and get to enjoy its speed and talent like nowhere else.