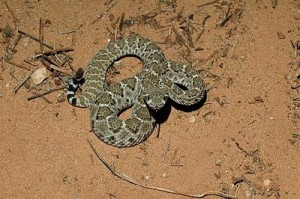 There are about 50 species of snakes in Florida but only 6 of these are venomous. Most snakes, venomous or not, generally slither away from humans unless it is provoked or feels trapped. Florida venomous snakes are all over the state. Keep away from one and do not attempt to catch or kill it, when you are hiking, especially if you are not sure if it is poisonous.

This snake is also known as the Highland moccasin, Chunkhead, and, simply, Copperhead. It can grow up to 36 inches long but some individuals have been recorded to be more than 50 inches long. Its body has crossbands that alternate reddish-brown to dark brown and light brown to grey bands. The darker bands have an hourglass shape while the head has plate-like scales.

Also known simply as a Coral snake, this species has a body that is ringed alternately with wide black and red rings that are separated by narrow yellow rings. Most adults do not grow more than 30 inches long but some can grow to almost 50 inches.

Sometimes called Water moccasin, it is found near water bodies, especially near swamps, marshes, and lakes. It has broad, dark cheek stripes all over its body. It has a wide mouth with a whitish interior lining. It can grow up to 48 inches but the record holder is 74.5 inches long.

This snake species grows to 72 inches (the record is 96 inches). It is the largest and most dangerous of all the venomous species in Florida. It has several rows of large, dark diamonds that have brown centers and light cream borders. Its tail ends with a rattle.

This rattlesnake grows to only about 24 inches long (the record is 31 inches). It has dark blotches that are separated by reddish spots. It has a tiny rattle that produces a buzzing sound.

It can grow about 60 inches long but the record is at 74.5 inches. It has a pinkish-grey to brown back that contains chevron-like black crossbands. It also has a distinct reddish stripe running on its back.