Before a hunt, most wild turkey hunters concentrate on their weapons, decoys and turkey calls. Little do they know that learning more about how turkeys behave in the wild will lead to better chances of finding them! Their feeding habits, along with their social and mating behaviors, will definitely give away clues on the best time of the day to find them and their locations as well. 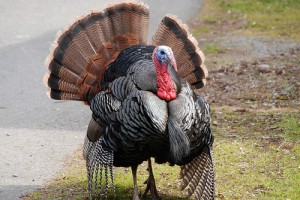 Wild turkeys feed more commonly during early mornings and late afternoons, thus, making these times the best period to hunt them. Also take note that they prefer wide open areas as their feeding grounds. Majority of their food sources can be found in theses open places especially during the summer months. Therefore, it would not be amiss to determine these places in your hunting grounds before the actual hunt.

Wild turkeys are omnivores, being able to feed on both plants and animals. They can be found either foraging the ground or mounting small trees and shrubs to find food. Among their desired foods include nuts, acorns, berries, roots, grasses and seeds. They also feed on small insects and occasionally, small amphibians and reptiles like newts. Because of their ability to feed on different kinds of foods, they can reach quite a considerable number even in small areas. Know when and where these food sources are rich in your hunting grounds as they may be the perfect location for the hunt.

Other than knowing when and where best to find them, learning about their feeding pattern will also help one to prepare more effective gear and equipments for the turkey hunt. For instance, knowing their feeding grounds will allow the hunter to wear attires and use gears that are aptly camouflaged to conceal them.

Never ignore the importance of knowing turkey eating habits since they could serve as clues to you. Although most hunters think that in hunting, only brawns rule, it wouldn’t hurt to use the brain sometimes. Knowing more about turkeys’ habits will allow you to understand your prey them and thus allow you to predict their behavior better. Strategize your hunt with research, and soon you’ll make wild turkey hunting an easy chore.