What kind of bait should I use?

What kind of bait should I use?

There are as many choices for baits as there are fisherman!  Do I use an artificial?  Is a Live bait best?  What about frozen baits?  A bit of history: In early times, fishing lures were made from bone or bronze.  The Chinese and Egyptians used fishing rods, hooks, and lines as early as 2,000 B.C., though most of the first fishermen used hand lines.  The first hooks were made of bronze which were strong but still very thin and less visible to the fish. The Chinese were the first to make fishing line, spun from fine silk. The modern fishing lure was made commercially in the United States in the early 1900s by the firm of Heddon and Pflueger in Michigan.

Before this time most fishing lures were handmade by individual craftsman. Commercial-made lures were based on the same ideas as the individual craftsmen were making but on a production scale.  There are literally thousands of artificial baits so let’s narrow it down to just saltwater fishing.  And to start off let’s say that nothing beats a properly presented live bait.  The problem with live bait is the ability to find them when you need them and to keep the life in the bait, thus the advent of artificial lures. 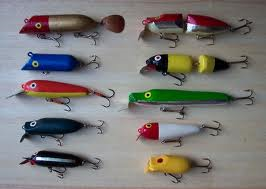 Since all artificial lures mimic live bait your first job is to find out what your targeted fish like to eat.  Are they top water feeders?  Do they eat crab and shrimp?  Lures are made to mimic every variety of saltwater bait fish and crustacean imaginable.  Proper technique is important when using artificial, retrieve speed is probably where most angles fail when using artificial.  Improve your skills in casting and retrieving to get the best results from lure fishing.   One of the basic axioms is “Retrieve fast in warm water, retrieve slowly in cold water.”  Fish strike for many reasons, they could be hungry, reacting to instinct, or protecting their nests, and sometimes change in retrieve will trigger a response, vary your retrieve, both the speed and the style.

Try to cast beyond your target area so that the lure is working properly by the time it reaches the fish.  In choosing a lure color, another good axiom says “Light days, light colors; dark days, dark colors.”  You may think just the opposite would work since the contrast would show off the lure, but the fish would recognize that something is off and won’t bite.  Remember two keywords: Presentation and Presence.  You are bringing an artificial object into a fish’s environment, trying to trick that fish into biting that lure. The more naturally and deliberately that lure moves through their environment, the better your chances of success.  Lead head jigs with hair skirts are one of the most successful artificial baits and are one of the easiest to use- to ensure a successful day of saltwater fishing, bring along an assortment of saltwater jigs.

Artificial lures come in many types, here are a few of the basics:

Crank Baits. Usually refers to a floating or diving plug of medium size used by freshwater anglers.  The term gets its name from the cranking motion of casting reels.  Can be reeled in or trolled.

Jerk Baits. The style of jerking or pulling a lure created this name.  It’s most often a floating lure used in freshwater, though sometimes any lure can be used for this style of fishing.  Excalibur, Rebel, and Rapala have models for this.  On a much larger scale, Pencil Poppers are similar.

Jigs. Though it was primarily named for the style of fishing, dropping the lure letting it settle, then pulling it up and dropping it again.  Now a jig means anything with a lead head fastened on the top of the hook.  Bucktail jigs like Hair Raisers or Bug Eyes are the most popular examples.  They can be used jig-style or cast and retrieved.

Plugs. Made from wood or hard plastic, these lures are classified in three categories: Floating/diving, Sinking, or Surface.  There is something called a suspension plug, which is a very slowly floating lure. Examples of all three categories are found in Rapala, Shad Rap, Bomber, Rebel, Rat-L-Trap, and Pencil Poppers.

Spinner Baits. This is the lure with a leadhead (like a jighead) on one end of a v-shaped wire and a blade or pair of blades on the other.  It is almost always a black bass lure.

Spinners. Mostly used in freshwater fishing, these lures are also used for salmon, steelhead, and ocean bass.  The design is basic: a spinning blade just under the eye of a hook, followed by either beads or a metal bell-shaped body.  Blue Fox, Mepps, and Panther Martin are examples.  It’s a hard lure to throw because it is so lightweight and is more often a trolling lure.

Spoons. Both shape and effect define these lures.  Spoons wobble and ripple the water, and more often than not they reflect light.  They can be thrown or trolled with great effect.  Most of them, like Krocodile, Pet Spoon, and Kastmaster, are metal, but there are some plastic varieties such as one made by Apex.

Stick Baits. This is a top-water, minnow-shaped lure that is supposed to resemble darting, skipping baitfish on the surface.  It can be retrieved steadily or jerked.  Examples are Zara Spook and Bagley’s Bang-O-Lure.

Swim Baits. Just about every angler saw the Banjo Minnow on TV, and most of us scoffed that it was too ridiculous to be taken seriously. Just one more gimmick. Maybe.  But there is quite a lot to be said for swim baits.  They do catch fish.  The one drawback is that they don’t last very long, especially with the more toothy fish, like halibut.  One or two strikes can often be the end of a swim bait.  However, most anglers will sacrifice a relatively inexpensive swim bait for a nice fish.  They throw beautifully and retrieve splendidly; there isn’t much doubt about that.  Rigging is fairly easy once you get the hang of it.  It’s best to lay the jighead beneath the bait for a look-see before you fasten it. 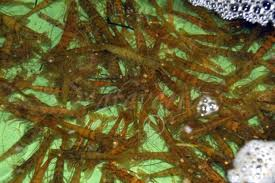 Nothing really beats live or cut baits.  For offshore bottom and reef species, cigar minnows, pinfish, squid, goggle eyes, ballyhoo and Spanish sardines work well.  Offshore top water mullet use pinfish and ballyhoo.  For inshore; shrimp, crab and mud minnows work well.    And then there is shrimp!  Shrimp are probably the best all round bait you can use.  You will get results on the bottom, top and mid water range under a bobber.

Keeping the shrimp alive is a must to achieve best results, although many bottom feeders like whiting, will eat cut dead shrimp.  A properly aerated bait box is a must for keeping live bait fresh and frisky. The best results are obtained from containers constructed without corners so the bait can swim smoothly along without crowding.  When considering an aeration system, choose a system that employs water circulation from outside and pumps that are not contained in the tank.  Keeping your live baits cool is another important factor for long life and frisky lusty kickers!  If you find a need to cool the water temperature, add sealed containers of ice or frozen gel-packs.

Another good bait for surf fishing and offshore reef fishing are cut clams.  Let’s not forget sand fleas – I have had some of the best shallow water reef fishing using a frozen sand flea and a piece of frozen shrimp on the same hook.  Small crabs and fiddler crabs make excellent bait, fish like redfish and sheepshead absolutely love them.  There are two methods most often used when fishing for specks and reds with live bait. The first method is in shallow water along reefs where various type corks are used to suspend the bait below the water. Corks such as weighted or non-weighted popping, clicking or sliding work well depending on what effect you want to achieve.  Corks mimics a deep gulping sound of a fish hitting bait on the surface, simultaneously producing a water spray, the water spray gives the effect of fleeing baitfish on the surface. 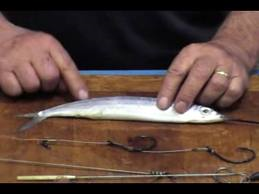 Ballyhoo are the king of live trolled baits like the shrimp are for still fishing.  The most popular big game fishing bait of all time is the rigged ballyhoo. Millions are used each year to catch a variety of game fish from marlin to king fish.

Rigging ballyhoo can be done in may ways but the object is simple; get the rigged bait to perform effectively for the fish you are targeting. First, thaw the bait in a brine solution of water, kosher salt and baking soda . The baking soda helps the baitfish retain its vibrant silver and white colors and kills any bacteria that can lead to deterioration. The kosher salt toughens the skin, which keeps the bait together longer on the line. Now remove the eyes by pushing a dowel or a small deboning tool through the eye sockets.  The next step is the most important. Flip the ballyhoo over in your hand and begin pinching the top of the ballyhoo with your thumb and forefinger starting from just behind the head and working back to the tail. As you pinch, feel the meat loosen from the backbone. When done correctly, the ballyhoo will become even more flexible once it’s rigged and it will swim beautifully.  Last step is to remove the stomach contents and air bladder by making a half inch incision at the anal vent and milking the belly contents out the opening. This is done by holding the fish upside down in one hand and placing your other thumb just behind the head and running it down the belly using a moderate amount of pressure. Be sure to empty the belly contents completely. Then rinse the baits in your brine and they are ready to rig.  Now you are ready to use the prepared bait for different methods of rigging split-bills to cover a variety of species and circumstances.