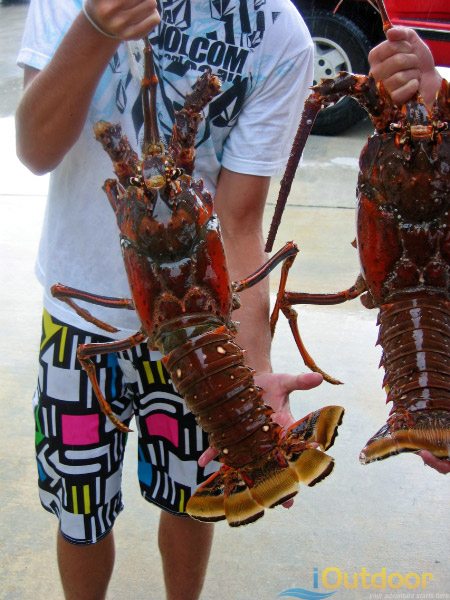 Those are not toddlers holding two lobster, those are two 16-year-old boys with two GIGANTIC 8 and 10-pound lobsters they caught off of the beach in Fort Pierce, Florida!  These two guys were free diving in 12 to 18 feet of water within swimming distance of the beach. Just 1,000 yards south of the Fort Pierce inlet.  No need to drive to Key West and fight the crowds, Fort Pierce, Vero Beach, and the surrounding waters have plenty of shallow water opportunities for lobster.

The two boys were in the water early in the morning at the opening of the two-day sportsman season. Using a gas-powered hookah, dive mask, snorkel, and fins these guys systematically scoured the shallow water reefs and ledges. Picking up keeper lobster until they ran into these two monsters.  There was quite a fight and it took over 20 minutes to pry each of these big boys out from under separate piles of rocks. I am afraid I might not have had the courage to tackle them, once I got to him!

Why Go to the Florida Keys

Most drivers assume that to find decent lobster on central Florida’s east coast. They have to go to deeper water and start at 60 feet or more. While there is plenty of lobster out there visibility. It is often poor and you are occasionally subject to very cold thermocline conditions. Even in 12 to 18 feet, we have had to wear 3mm wetsuits. Only to be able to stand the thermocline that occasionally rolls in the right to the beach!

But it’s easy to pick on either the north side of Fort Pierce Inlet or the south side for the sportsman season. Especially if night diving does not bother you, can start your lobster dive at  12:01 midnight opening day of the two-day sportsman lobster season. After that, it is pretty slow unless you head to deeper water. Good luck!