Alligator hunting is among the most dangerous and challenging sports enjoyed by humans. It is especially thrilling to hunt an alpha predator but can be very dangerous mainly because, well, these are aggressive predators with powerful jaws, thick scales, and powerful bodies. Still, year after year, thousands of people go alligator hunting.

You can arrange for a hunt with a guide who will process the necessary permits and bring the necessary equipment. You can also go along in the public water hunts encouraged by the Florida conservation commission to check the population of these creatures. These public hunts are held all over Florida, in lakes, wetlands, marshes, rivers, and other locations from August to November. A permit needs to be obtained even for this public hunt. 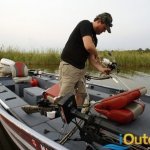 Most people choose to go hunting during the daytime to reduce the risks of becoming the prey but thrill-seekers arrange for night hunts. Hunting during the night can be doubly challenging, doubly exciting, and doubly dangerous, too. Still, many hunters consider night as the best time to hunt if you are really looking for a challenge.

The best time of year to alligator hunt in Florida is during the peak season – from August to October. However, hunts are actually available anytime from April to November. Still, the state allows some guides to hunt outside this season – nuisance tags – and some private farms to allow hunting year-round.

Aside from Florida, alligator hunting is also legal in Georgia, Texas, and Louisiana. In Texas, the season is set from April to June and September. In Georgia and Louisiana, you can hunt alligators from September to October only.